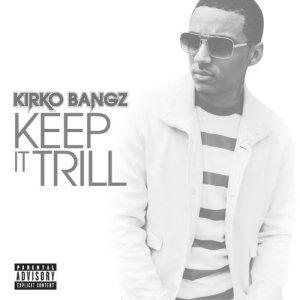 Kirko Bangz seeks to present himself as a self sufficient artist.

Dallas, TX February 20, 2013 – Gaining much attention from both his singles, “What Yo Name Iz” and “Drank In My Cup”, Houston-bred rapper Kirko Bangz released his song “Keep It Trill” on November 27, 2012—the first single from the rapper’s highly anticipated 2013 full-length album. Bangz has yet to mention the album’s exact release date, however, the rapper stated in a recent interview(1) that production is still underway, and fans can expect the release “Probably sometime summer time”.

With an especially culminating year in 2012, Kirko Bangz’ career has swiftly flourished throughout the past three years. From a relatively unknown Houston-scene rapper, to an acclaimed nation-wide performer, Bangz has collaborated with the likes of Master P, Meek Mill, French Montana, Young Jeezy, and Chris Brown–to name a few.

Although Bangz hopes to collaborate with a variety of artists in the future, he remains adamant about releasing a “home-grown” debut album; Hoping to show his worth as a self-sufficient artist, rather than relying on the fame of others.  Kirko explains,  “I got some things I want to come together with a couple of people. But, really I feel like this album is for me to prove myself.  I feel like a lot of people mess with my records, but I really wanna let people know that I’m an artist and I can do it on my own. And then, later on, I’ll get with everybody else.”

While suspense builds for Kirko Bangz’ career and album release, fans can soothe their anticipation with the news of the “Keep It Trill” music video, as tweeted by the rapper while on set.  The video was shot in Los Angeles in early February.  It is rumored that fans can look forward to the video’s release by this spring.

(1) in the first paragraph references part of an interview taken from a post on hotnewhiphop.com on Feb. 5, 2013.