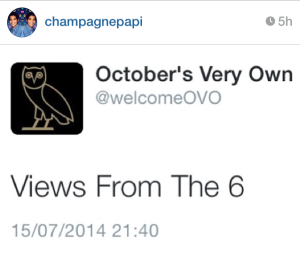 It has been a very busy year for Drake. He recently had his first HAW weekend in Houston Texas, which was a huge success. His fifth annual OVO Fest is coming up in Toronto and he will also be going on tour with Lil Wayne. It hasn’t even been a year since he released “Nothing Was The Same” and today, he announced the title to his Fourth Album ” Views From The 6th”. Stay tuned for more details!