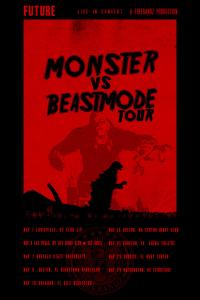 Future announced his upcoming tour titled “Monster Vs. Beast Mode” Tour. The tour will begin May 1st 2015 in Louisville, Kentucky and end May 24th at Washington ,DC.

Future also announced he will be joining Drake on his “Jungle Tour” which will begin May 24 in Houston, Texas and end June 5 in New York.